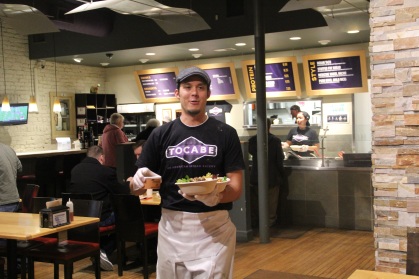 Some of Ben Jacob’s fondest food memories including sitting at a picnic table in his aunt’s back yard in Oklahoma, smelling the fire, and eating Osage foods like fry bread. When Ben was six, his parents started Grayhorse American Eatery, a small walk-up establishment in a food court– in an effort to make Native foods like this available to the broader community. A few decades later, Ben sought to build on this idea through Tocabe (which means “blue” in Osage), a casual dining eatery in Denver that draws from the foods his Osage relatives were preparing in Oklahoma. As Ben described to the audience at the 2015 Food Sovereignty Summit, food is important to the Osage community, but this type of food was not generally available outside of the annual dances, powwows, or special occasions at grandma’s house. In order to bring this food to a wider audience, Ben went to his mother, aunts and uncles and learned more about his grandma’s recipes, and then gave them is own style. 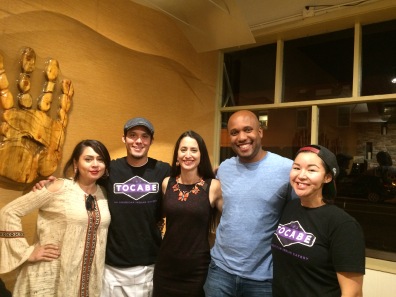 I had the opportunity to go eat at Tocabe when I was in Denver in November for the American Anthropological Assoc annual meeting. Claudia Serrato (far left) and one of my Williams College buddies Tamaan Osbourne-Roberts also came along for the adventure. It was also a great opportunity to catch up with Tessa McLean (far right) who I knew from the Indigenous farming conferences in White Earth

Ben collaborated with friend Matt Chandra to open Tocabe in December 2008, and how now added an additional location in Greenwood Village. The menu is based on Indian tacos, with fry bread (his grandma’s recipe) as the starting point—he wanted to start with something that was accessible and familiar to people. But the goal was not to be a frybread house—Ben acknowledges that this food is “an important part of our history and our present” but he’s added a twist to it by making lean meat and a variety of fresh vegetables available to pile on top. Ben also notes that “frybread was a doorway into the cuisine,” which Tocabe will continue to develop. At the Food Sovereignty Summit when the room became embroiled in a frybread debate, Ben described that while he agrees it is not the healthiest food, he works to serve it in a healthier way. They don’t use lard. He studied oil absorption into the bread and found that it was less than 1 tbs—which is less than French fries. He sees serving fry bread as important because its “respecting what the women in our lives have done to sustain us. It was something done to sustain the people, to give us the opportunity to stand here. And now we have the opportunity to do new and better things… I know we’re doing something when people don’t order frybread.” Ben is now expanding on the available dishes through traveling to and learning from other indigenous communities around the country. 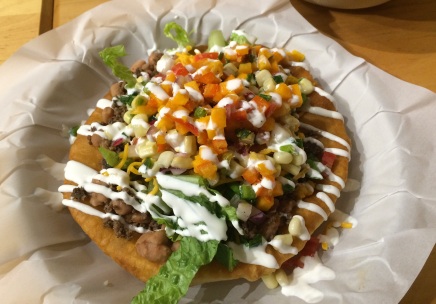 Frybread that Ben assembled for us with buffalo meat, beans, lettuce, butternut squash, cheese, sour cream, hominy, peppers and onions. A decent dose of veggies! It was delicious. (Photo by Elizabeth Hoover) 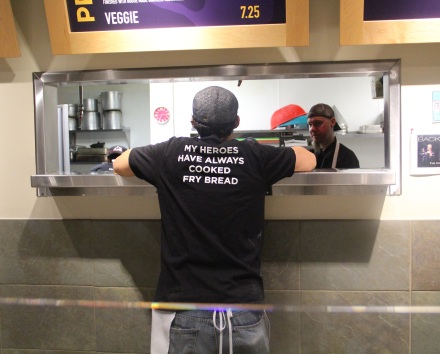 Chef Ben looking back into the kitchen. (Photo by Elizabeth Hoover) 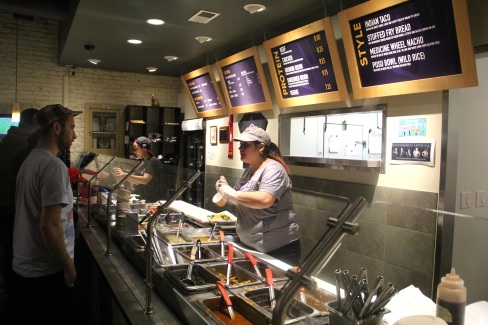 Customers choose a base for their meal: Indian Taco, Stuffed Fry Bread, Medicine Wheel Nacho, or Posu Bowl (wild rice). Then they select a protein: beef, chicken, ground bison, shredded bison, or veggies, and then add toppings, like the restaurant’s signature Osage Hominy Salsa. Check out their full menu. (Photo by Elizabeth Hoover) 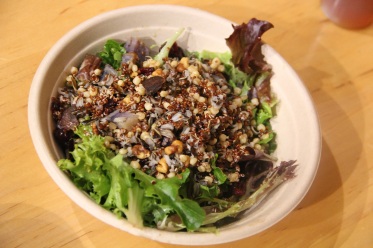 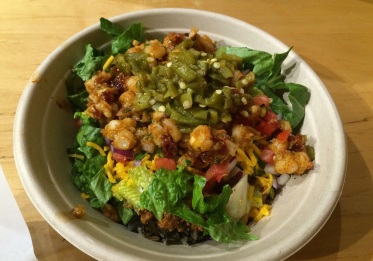 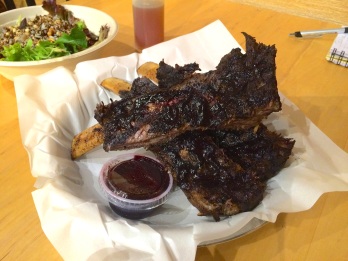 Buffalo ribs in a blackberry sauce (photo by Elizabeth Hoover) 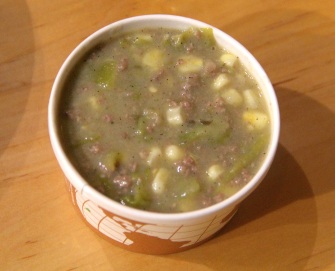 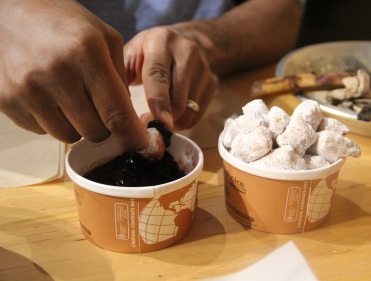 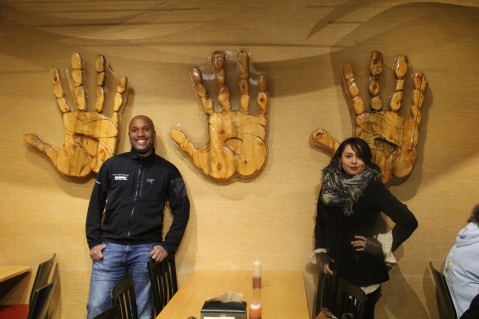 The three hands on the wall are hand carved from beetle kill pines, and represent the three villages of the Osage (Hominy, Gray Horse, and Pawhuska). Photo by Elizabeth Hoover 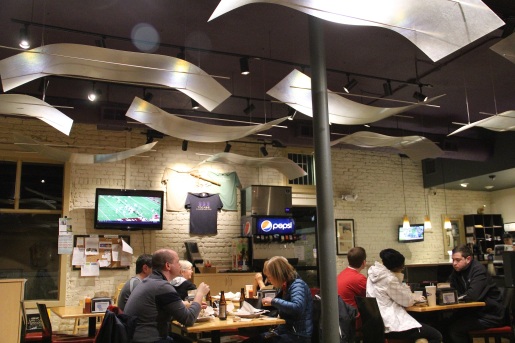 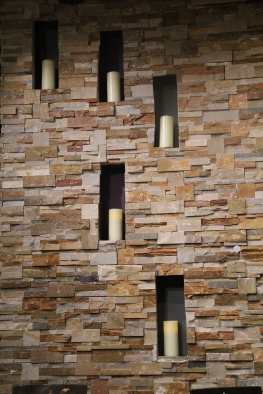 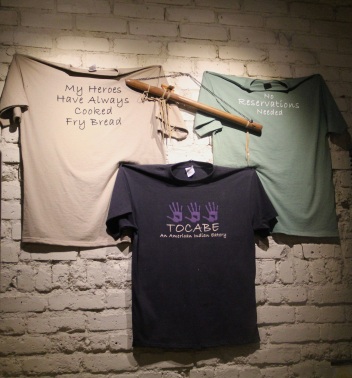 Shirts for sale in Tocabe. Photo by Elizabeth Hoover

Whenever possible, Tocabe supports local food producers by buying local ingredients. But the restaurant prioritizes buying from Native food producers first—even if that means wild rice, beans, and corn may have to travel across the country. Ben noted that they are developing their own unique food system, connecting food producers from around the country. They are currently able to source from seven different tribally owned food producers—for products like blue and white corn, olive oil, elderberry vinegar, wheat berries, red quinoa, white tepary beans, and wild rice. Ben noted that 7 years ago when they opened, they didn’t have this ability—the producers didn’t have enough quantity available, and Tocabe couldn’t afford to pay extra for ingredients. But now the restaurant, and the number and size of Native food producers has grown together. 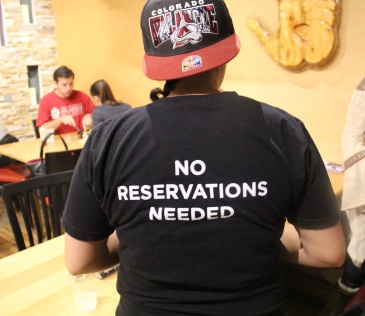 As Ben described to Food Sovereignty Summit participants, “We have a mantra we go by; ‘eat with tradition.’ That’s not just the ingredients, but the whole concept of what we do. Eating with family, grandma’s food. That’s how we carry ourselves now.” Ben notes though, that while his food is based on traditional recipes, it’s also evolving. He described how people come into his restaurant expecting 150 years ago, even though other types of cuisine have progressed. “Why can’t our food be just as progressive? Why can’t our gastronomy evolve as well? Why can’t we learn different ingredients, different styles and techniques as a group. The goal is to define and discover what our food is on a larger scale.”