The Nisqually tribe has been fishing and gathering along the Nisqually River and Puget Sound for at least the past 3,000 years. Their reservation was established east of the Nisqually River on 1,280 acres in 1854 by the Treaty of Medicine Creek, and expanded by executive order in 1856 to 4,717 acres on both sides of the river. This land was then divided into individual allotments in 1864. In the early 1900’s Pierce County condemned a majority of the reservation, 3,353 acres of Nisqually land, removing tribal members from their homes in order to transfer the property to the Army to expand the Fort Lewis base. In the past 25 years, the Nisqually Tribe has been working to to reacquire some of their homeland, and increase their local food production. 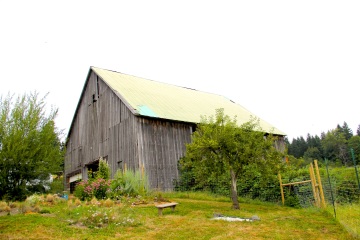 Ken Braget’s family had owned a dairy farm on 410 acres of Nisqually riverfront pastures for the past 100 years. This property was wanted by the Port of Tacoma to make a shipping harbor, by Weyerhaeuser Real Estate Company to build hundreds of homes, and by Fish and Wildlife and conservation organizations to preserve for its ecological diversity. A gravel company adjacent to the property was also looking to expand. In addition, the property was wanted by the Nisqually Tribe, to gain back some of their land and to ensure access to important fishing and gathering sites. As the staff of the Nisqually farm remember it, Ken didn’t like government and didn’t like industry, so he opted to sell to the tribe, in exchange for letting him live there until he passed away. 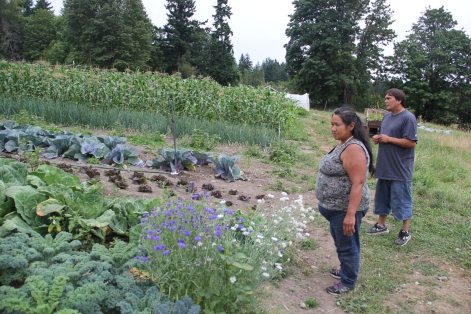 The Nisqually tribe originally started their garden in 1980, as a way for the youth to give back to the elders by growing food for them. A few years later, it was graveled over to create an overflow parking lot for the casino. Community planners surveying tribal members found that people missed the garden, and so when Ken Bragget’s land was acquired it was decided that about 4.5 acres would be dedicated to creating a new vegetable garden, perennial food and medicine garden, and berry patches, in addition to the existing orchard. Five years later it has grown into beautiful fields of vegetables, berries and melons that feed Nisqually community members, and also provides job opportunities for people in recovery from drug and alcohol addictions through a Vocational Rehabilitation (voc-rehab) program. 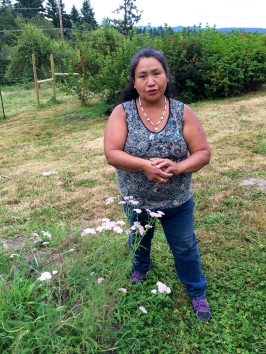 We were led on a tour of the farm by Grace Ann Byrd, a field technician who is a full time employee at the farm, and Julian who is a seasonal summer worker. Grace has a wonderful beaming smile, and speaks with great pride about her journey through recovery, and about the hard work that has gone into each of the crops on the farm. Both Grace and Julian cited the farm as an important place where they could grow as people while they were growing food for the community. As Julian stated, “I never in my life thought that I would be working on a farm, or be a gardener, and something like that. But I think it’s a big part of my recovery just being down here, it’s so nice and quiet, and the people down here, you know some of them are in recovery too. I don’t think I would’ve stayed in recovery if I didn’t work down here. It had a big part in me staying clean and sober” for the past 2 years. Grace made sure to emphasize that while working in the garden had provided her the opportunity to work through rough times in her life, “we believe in not working angrily around food because it could transfer into the food and into the community. So when you go to see where our food is served– at an Nisqually Youth Center dinner, for the elders, even at the canoe journey–you’ll see everyone joking, laughing, having a good time. I like to feel that it was because of the love and the prayers we put in, and the laughter from working with the food in good way.” 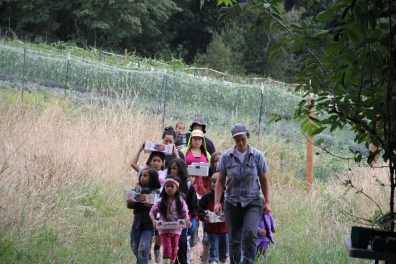 There are four permanent staff working at the farm (two of which are Nisqually members), with the seasonal workers coming from two different job training programs; the tribal Vocational Rehabilitation program, and another run by the South Puget Intertribal Planning Agency SPIPA. Program Supervisor Caitlin Krenn explained to us that the long term goal of the project is that it be run entirely by Nisqually people. She is very good natured about the fact that a big part of her job is training others to take her place, essentially putting herself out of a job. 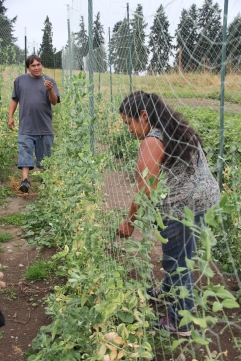 The garden produces enough bounty for two farm stands a week (Tuesday and Thursday) at which Nisqually community members can pick up free produce (although donations are encouraged). The food is also donated to the elders’ center and youth center for meals. In addition to tending the garden, staff has helped to set up garden beds at the youth center and at the elders building, and a rainbow garden at the Head Start where graduating kids each got to plant something. In short, the Nisqually tribal garden program is working to benefit youth, elders, people in recovery, and those in need of jobs training. The Nisqually were not traditionally farmers– Gracy Ann laughed, “it’s ironic because when Isaac Stevens wanted to put us on reservations they wanted to make farmers out of us. And, you know, we were root diggers, fisherman, just lived off the land naturally.” But the community has made this farm their own, and will continue to grow it. 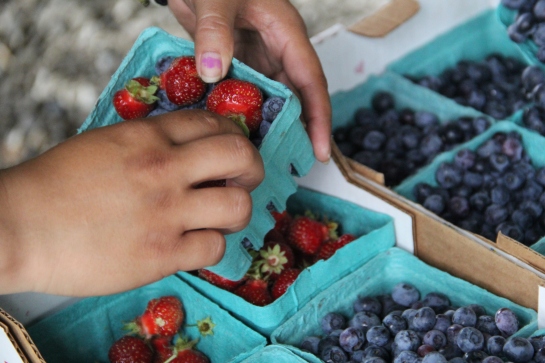 Fresh strawberries and blueberries from the Nisqually garden. The garden provides elderberries, thimble berries, salmon berries, high bush cranberries, huckleberries, 7 different kinds of blueberries, raspberries (red and yellow), blackberries, and strawberries. Most berries are given to the elders and other community members, but any leftovers are made into jams and given away at harvest dinners. Photo by Angelo Baca 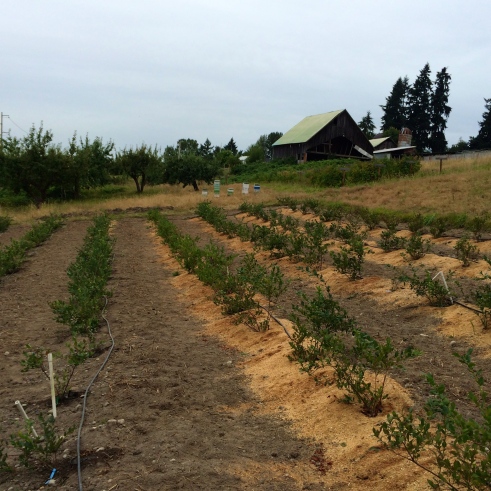 Blueberry fields at the Nisqually garden. According to Grace Ann, “they say blueberry fields are where our songs come.” She likes working there, because she and her colleagues have had good luck composing songs there. Photo by Elizabeth Hoover 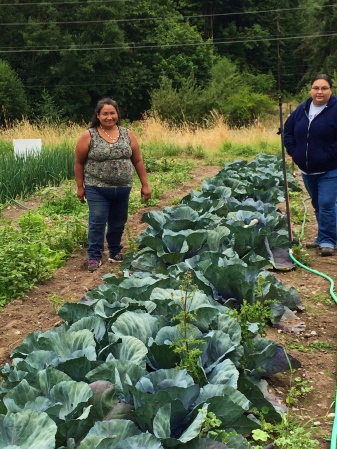 Grace Ann and volunteer Jenny in the cabbages. Photo by Elizabeth Hoover 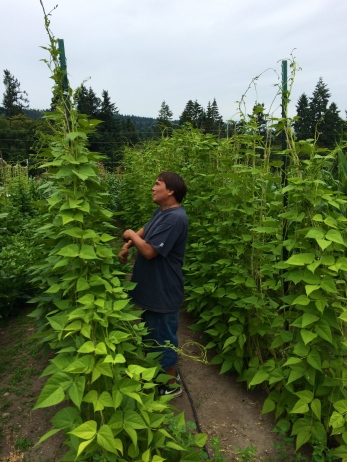 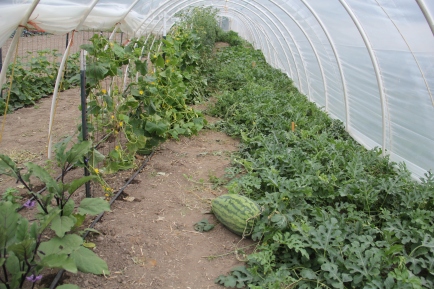 Epic watermelon growing in the greenhouse. Photo by Angelo Baca 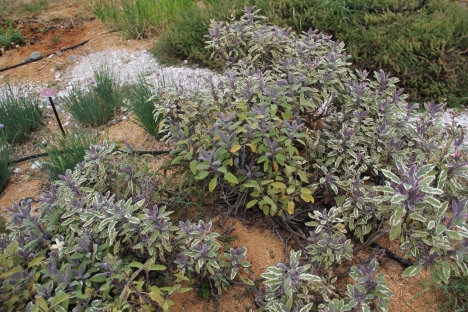 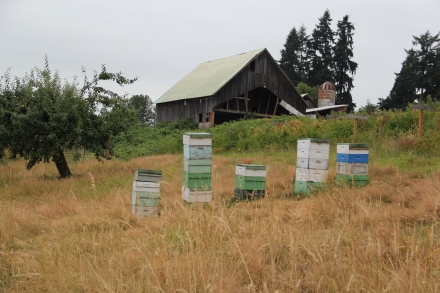 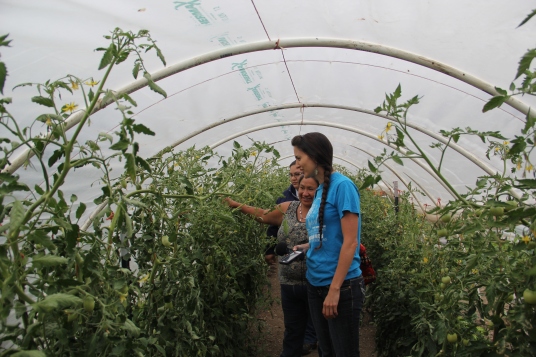 Touring the tomatoes in the Nisqually greenhouse. Photo by Angelo Baca 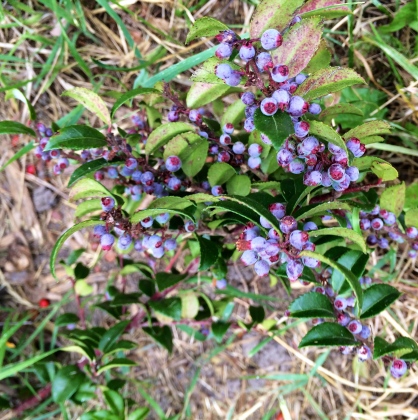 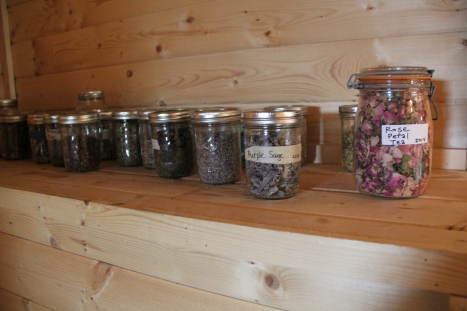 Herbs from the garden are dried and saved for tea. Photo by Angelo Baca 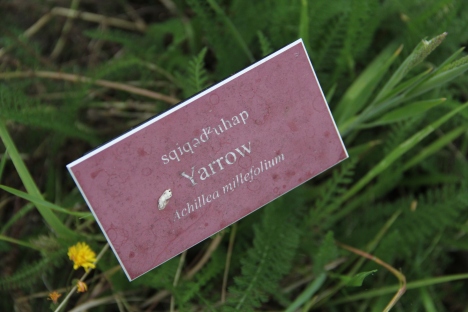 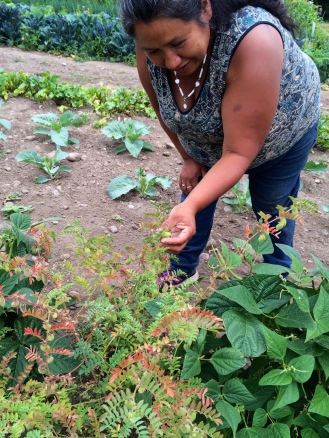 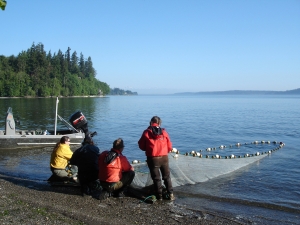 The tribe also has a several hundred acre shellfish farm, as well as a fish processing plant through which they buy from local fishermen, to make sure they get a fair price. Photo of Nisqually fishermen courtesy of USGS 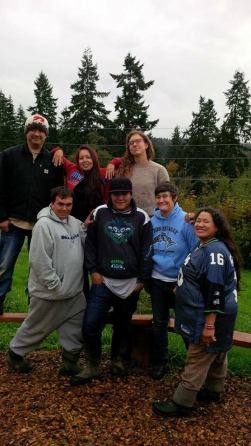 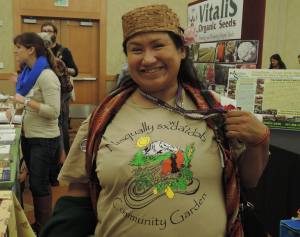 Grace Ann modeling one of the t-shirts given out to Community Harvest Dinner participants. Photo provided by Grace Ann Byrd