nkwaienthon:hakie (Mohawk for “We Are Planting Good Seeds”) is a collective of farmers, educators, and entrepreneurs in the Akwesasne Mohawk community, located on the borders of New York, Ontario, and Quebec. In 2007 the group received a grant from Heifer International, which funded the construction of a community greenhouse, garden, and cannery; as well as individual projects at members homes, including laying hens and pigs. 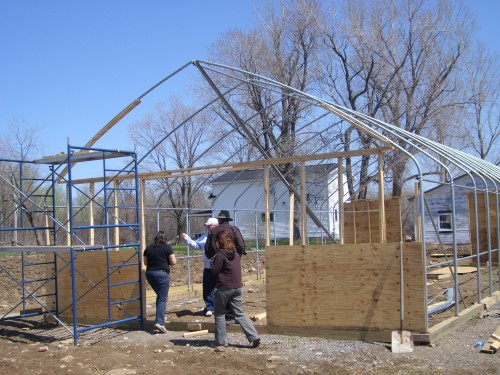 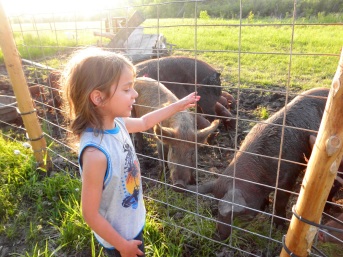 Shoienkawarionwane (2011) with his family’s pigs, their home project funded through Kanenhi:io. Photo by Elizabeth Hoover 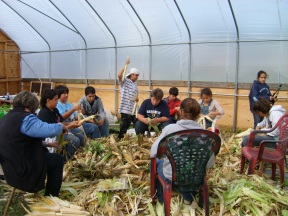 Kanenhi:io collaborates with the Akwesasne Freedom School (AFS), a Mohawk immersion school founded in 1979 by parents who were concerned with the lack of culture and language in the public school systems. The school conducts full day language immersion classes for students in pre-K to grade 8, with a curriculum based on the Ohen:ton Karihwatehkwen (Thanksgiving Address). The AFS owns the 10.5 acre site where Kanenhi:io has developed the community garden, greenhouse and cannery. In addition, school staff and parents are partnering with Kanenhi:io group members to involve students in the production of food. 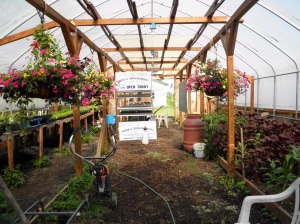 The greenhouse was constructed in 2008, and has provided community members with a place to start seedlings for the community garden and home gardens, as well as to grow warm weather crops like tomatoes and amaranth. The community cannery was developed between 2011-2014, and has provided a place for community members to dehydrate, can, and freeze produce, as well as to press apples into cider. One of Kanenhi:io’s goals in the coming year is to expand the offering of food preservation and gardening classes offered at the cannery, as well as expand the video and book library.

Community garden, with cannery in the background, June 2013. Photo by Elizabeth Hoover

Crops grown in the garden include lettuce, peas, beans, carrots, beets, squash, and sunflowers, some of which were sold at the weekly farmers market last summer. The community garden site also consists of an herb garden, tended here by Rachael and her son Amaro. One of Kanenhi:io’s goals is to teach the next generation how to grow their own food.

In addition to planting market crops in the community garden, Kanenhi:io has been working with seed savers across Haudenosaunee territory to bring back more heritage seed varieties– both to preserve these crops planted by ancestors on this land, and in an effort to work traditional foods back into people’s diets.

As well as older varieties and methods, Kanenhi:io members have been experimenting with terraponics– starting seeds in trays filled with special potting mixes that are then doused with nutrient-rich fluids. in the coming year, they are also interested in expanding this system as well as experimenting with aquaponics- in order to provide both fresh produce and fish to community members. 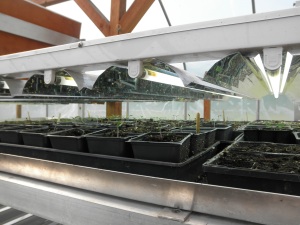 In addition to the Freedom School students, Kanenhi:io also works with the Ohero:kon rites of passage program, begun by bear clan mother Louise McDonald as a way of educating adolescents about their traditional roles and obligations as they become Mohawk adults. Because horticulture is such an important aspect of Mohawk culture and health, members of Kanenhi:io are working to involve the Ohero:kon adolescents in farming and gardening projects. Part of the Mohawk creation story includes the first garden, which sprang forth from Sky Woman’s daughter. As part of the rites of passage ceremony, the youth create a woman out of soil, into which they plant corn, beans, squash and tobacco.   Through nurturing the land, as well as the social and cultural relationships that are integral to sustainable food production, Kanenhi:io, the Akwesasne Freedom School, and the Ohero:kon rites of passage are working to make Akwesasne a healthier, more food sovereign community. 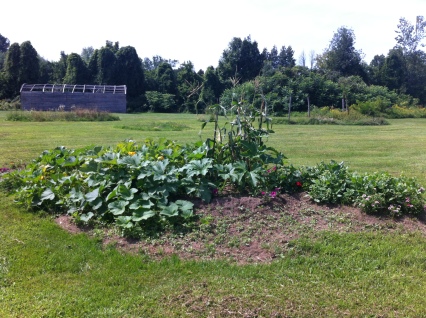 Mother Earth garden, August 2013. Youth planted squash at her belly, corn at her breasts, beans at her fingers, potatoes at her feet, strawberries at her heart, and tobacco at her head. Photo by Elizabeth Hoover

Mother Earth garden, May 2014. Youth shaped the earth in the shape of a woman, and planted the seeds which will grow into a garden similar to last year’s photo above. Photo by Elizabeth Hoover