On March 6-8 over 250 participants gathered at the Maplelag cross-country ski lodge on the White Earth Reservation for the 12th Annual Indigenous Farming Conference, sponsored by the White Earth Land Recovery Project. Over the course of three days, farmers, seed keepers, scientists, college professors, program directors, and Native youth presented on indigenous food traditions; research they had conducted; and on successful innovations in growing, harvesting and distributing food. Events also included seed exchanges, and youth events that centered around cooking, seed saving, and beading. The event culminated in a meal by Sean Sherman, The Sioux Chef, which included local indigenous ingredients. Below I’ve summed up just a few of the many panels that were presented: click here for the full agenda

This year’s conference crowd filled the entire Maplelag dining room, where people gathered for three home cooked meals a day, and to talk and visit. Photo by Elizabeth Hoover 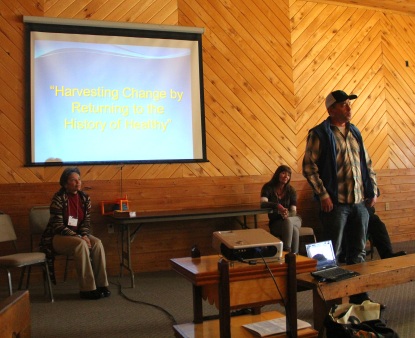 Jamie Holding Eagle, who is currently a graduate student at the North Dakota State University, gave a collaborative presentation with her advisor Dipayan Sarkar. Dr. Sarkar presented about the nutritional benefits of traditional food crops, which he found contain a higher concentration of secondary metabolites with bioactive functionalities to fight insects, pathogens and stress in the plant, but also have health promoting properties for humans. These plants help to alleviate the oxidative stress of high carb and high fat diets, and are healthier for diabetics. Jamie presented about the role these foods played in the lives of her Arikara/Hidatsa/Mandan ancestors, and her work growing out these traditional plants and studying their health promoting properties. Photo by Elizabeth Hoover

Rowen White (Akwesasne Mohawk who now runs the Sierra Seed Cooperative in CA), Zachary Paige (farm manager for the White Earth Land Recovery Project) and Diane Wilson (Dakota, executive director of Dream of Wild Health) presented on the Upper Midwest Indigenous Seed keepers Network. The panel talked about the formation of the Network in an effort to help Native communities preserve and utilize their traditional seeds. The Network has conducted a number of seed saving workshops in Native communities, and recently received an ANA (Administration for Native Americans) grant to continue this educational work, and to help communities develop a database for their seeds. One of the challenges that the group discussed is remaining a culturally based seed keeper project– so not just physically keeping the seeds, but also developing a fundamental understanding of the cultural needs of these seeds. Photo by Elizabeth Hoover

Dr Dan Longboat (Mohawk), Director of the Indigenous Environmental Studies Program at Trent University, gave a presentation titled “Tyonnhehkwen, It to us gives live! Indigenous Sovereignty is in Our Seeds”, which discussed the original instructions given to plants and human by the creator, and the importance of preserving this indigenous knowledge for health. Photo by Elizabeth Hoover

Natasha Myhal (Ojibway) discussed her work as a research intern at the Salish Kootenai College, where she interviewed elders and camas harvesters in Montana about traditional uses of the plant, and where it flourishes. Photo by Elizabeth Hoover 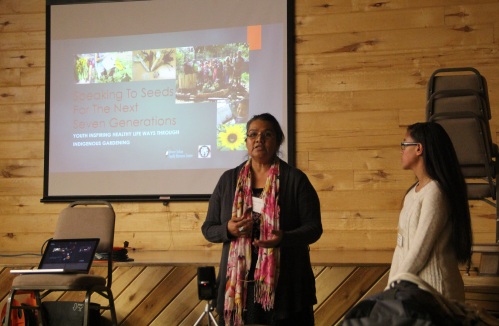 Shannon Francis (Navajo) and Jasmin (Choctaw) from the Denver Indian Center youth garden program, where a dozen Native teens became mentors to 46 young people for an 8 week garden program. Over the past four years they have built up the soil for their urban garden, where they employ different methods of permaculture, intertwined with indigenous plant knowledge, to teach youth about culture, taking care of plants, and eating healthy. With less than 1/5 of an acre, they were able to feed 10 families twice of week. They estimate that in the coming year, they will be able to grow 3 tons of produce on this plot. Photo by Elizabeth Hoover

Mike Myers (Seneca) presented on “An Indigenous Perspective on Development,” which encouraged participants to ensure that they types of development project their communities undertake are congruent with the indigenous values of their community. Photo by Elizabeth Hoover

The conference was also a great time to catch up with friends! Pictured here Ernie Whiteman (Arapaho) the Dream of Wild Health Cultural Director, and Christina Elias the head farmer of the Mashkiikii Gitigan garden. Photo by Elizabeth Hoover

Dr Martin Reinhardt (Ojibway), assistant professor of Native American Studies at Northern Michigan University, presented on the Decolonizing Diet Project that he conducted with 25 volunteer research subjects. Recognizing that most food projects in Indian Country weren’t research based, he set out to determine the health impacts of reconnecting people with indigenous foods. Participants agreed to commit between 25%-100% of their diet to indigenous foods from the Great Lakes Region from March 2012-March 2013. A physician weighed and measured participants throughout the study. Results found significant reductions in weight, girth, and BMI, and noteworthy reductions in cholesterol, blood pressure, and blood glucose levels. Photo by Elizabeth Hoover

I also had the opportunity to present about our trip this summer, and this blog. Topics covered included the successes and challenges experienced by some of the organizations we interviewed, and the types of advice that interviewees gave for new farming groups getting started. I’ll post a blog soon summarizing some of these results. Photo by Melissa Lewis 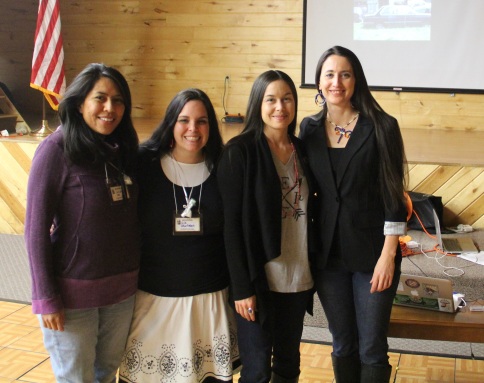 Some of my dear friends who stuck around after my presentation. From L-R; Joslynn Lee (Navajo) who is a postdoctoral researcher at the University of MN Duluth Medical School; Liz Charlebois (Abenaki) who is a nursing student and who also is working on a seed library for the Mt Kearsarge Indian Museum in NH, and Melissa Lewis (Cherokee) who is an Assistant Professor of Biobehavioral Health and Population Science, and who works with the Center of American Indian and Minority Health. Photo by Frank Sage

Seed swapping was also a big part of the conference. Here, participants are shelling orca beans to take home to their own gardens. Photo by Elizabeth Hoover

You can see why they’re called orca beans! Photo by Elizabeth Hoover

Frank Kutka (in the green coat) is the North Dakota SARE Coordinator
and the Dickinson Research Extension Center Assistant Director. He is also a corn breeder who has been working for years to develop organic corn varieties suitable to the northern plains. Frank has worked with a number of Native communities to help preserve and develop their corn, and has given away a great deal of corn to indigenous farmers in the upper midwest. To his left (in the red hat) is Zachary Paige (farm manager for WELRP), who worked to coordinate this conference. Photo by Elizabeth Hoover

Some of the corn varieties that Frank was giving away. Photo by Elizabeth Hoover

Seed swapping also occurred in the lobby between sessions, where people shared seeds, stories, and growing advice. To the far left is Woodrow White (Ho-chunk) from the Ho-chunk Whirling Thunder farm. To his left is Dan Powless (Ojibway) from the Bad River food sovereignty Project. To his left is Ernie Whiteman (Arapaho) from Dream of Wild Health. To his left is Mike Myers (Seneca) who is currently working for Leech Lake Band of Ojibwe as the Director of the Tribal Development Division. To his right, Rowen White (Mohawk) who is on the board of Seed Savers Exchange, and who is the director of the Sierra Seed Cooperative. To her right is Frank Kutka,North Dakota SARE Coordinator and the Dickinson Research Extension Center Assistant Director 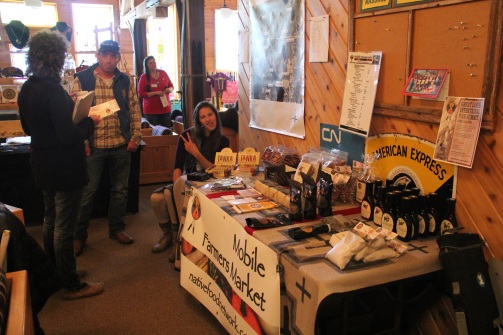 Also set up in the lobby were a number of vendors, some selling crafts or natural salves, and some selling indigenous food products. The Mobile Farmers Market is run through the Intertribal Agriculture Council. You can read more about their products, and the cross country trip that Dan Cornelius took with the market on their website.

Another food for sale was Shane Plumer’s Wild Rice Pasta, a product of his company Red Thunderbird Endeavors. The pasta is rich in protein (16g per serving), whole grains and omega 3&6.

We also had the great opportunity to enjoy a meal prepared by Sean Sherman, also known as the Sioux Chef. Here Sean is preparing a tea to go with the meal, from cedar branches he picked fresh for the occasion. Photo by Elizabeth Hoover 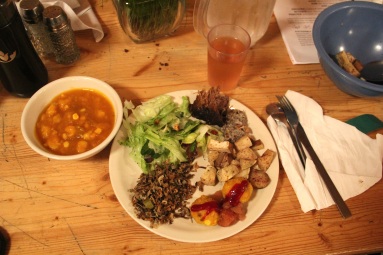 And then there were awards! To my right, Dan Longboat. To my left, Terasita Equay Diaz an 8th grader from White Earth who did an experiment on the effects of dandelion tea on helping type 2 diabetics moderate their blood sugar

Winona LaDuke, one of the founders of the White Earth Land Recovery Project and the director of Honor the Earth. The plaque I’m holding says: “Oshkiigitiged This new gardener award is presented to Elizabeth Hoover for utilizing imaginative and unconventional methods in the production and harvesting of traditional foods.” This award was to acknowledge the Garden Warriors Good Seeds blog constructed Angelo Baca and I. Photo by Keri Pickett 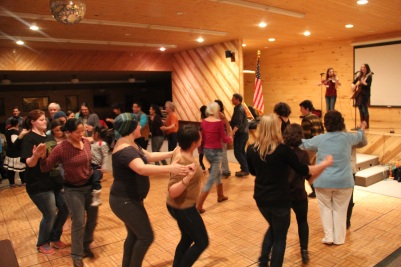 The evening concluded with our attempts at Metis jigging and reels, guided by Caroline Chartrand, to the music of Sister Tree. Photo by Elizabeth Hoover