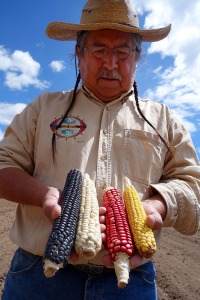 Clayton Brascoupe, one of the founders of the Traditional Native American Farmers Association (TNAFA) has lived in Tesuque for 40 years and has even been appointed several times to the tribal council there, although he is Mohawk and Anishnaabe, born on the Tuscarora reservation. He worked in his family’s gardens in upstate New York as a child, and then began working on a commercial farm when he was 13. As he got older, he worked on other farms, pruning and tying grapes, and on tobacco farms in southern Ontario. He then began traveling with the White Roots of Peace, a Haudenosaunee organization that traveled the country in the early 1970’s educating people about Native American issues. He met his wife Margaret in January of 1973 in her home community of Pueblo of Tesuque. From there they traveled together to the AIM occupation of Wounded Knee, and then were married in September. Clayton moved into the pueblo and began farming with Margaret’s father and uncles. 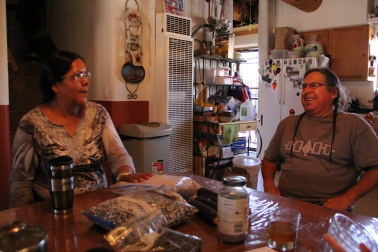 Margaret and Clayton in their kitchen with some of their traditional corn. Photo by Angelo Baca

Faming in Pueblo villages is an activity mainly for men. The men plant, irrigate the fields, and do the hoeing and the weeding. The women and children come in during the harvest time–men will pick the harvest and the women and children will husk the corn. This is different from Haudenosaunee custom, in which the women were responsible for a great deal of the farming. Even with the traditional gender divide in labor, Clayton and Margaret worked together in their cornfields, and raised their four daughters to be farmers from a young age. Margaret expressed to us how concerned she was that people in the pueblo would talk, and would tell them not to break tradition by having women in the field, but they didn’t. Clayton and Margaret’s daughter Winona just recently moved back to Tesuque with her husband and infant son, so that he could have the experience of growing up in the fields like she did. She became emotional describing the contribution her parents have made to her life by farming and involving her, even though it took her until adulthood to appreciate it. As her mother Margaret expressed, “This is really important because what if we don’t have anymore grocery stores. If you know how to plant these seeds, you don’t have to depend on anyone… If you take care of the land, the land will take care of you.” 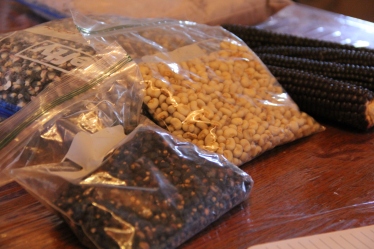 In 1991, Native Seed SEARCH, a non-profit seed conservation organization based in Tucson AZ, conducted a meeting with 62 Native American farm families on 17 reservations and pueblos in Arizona and New Mexico to learn more about their needs and challenges in maintaining their land and way of life. Clayton noted that one of the concerns was the lack of young people involved in farming– his was one of the few young families at the meeting. As a result of a decline in farming, the elders present noted a decline in social health in their communities—drug, alcohol, and domestic abuse, as well as health problems like diabetes and obesity that they did not see when they were younger and everyone was involved in food production. In addition, they were concerned about loss of seed diversity and the amount and quality of water available. 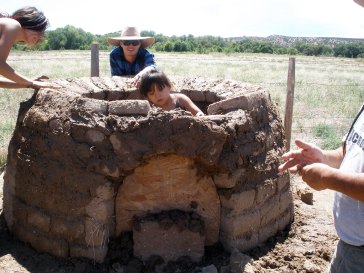 Building a traditional oven at a TNAFA workshop

Out of this first meeting of indigenous family-scale farmers, the Traditional Native American Farmers Association (TNAFA) was formed. Since 1992 TNAFA has been working to increase interest in agriculture from all sectors of our communities, especially our youth. In 1996 TNAFA became an Affiliate Program of the nonprofit Seventh Generation Fund for Native Development. Since forming, TNAFA, headed by Clayton, has provided workshops in seed saving, health and wellness, sustainable farming practices, and traditional food production. 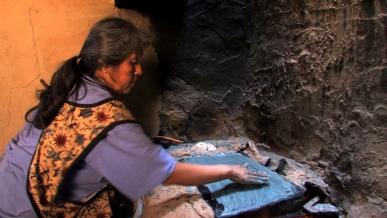 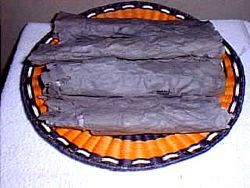 Once Clayton and Margaret harvested all of their corn described earlier, their next goal was to bring back more of the old ways of storing it and cooking with it. Piki bread—a wafer-thin bread made by smoothing a fine layer of blue corn meal on a hot stone, had not been made in Tesuque since March 1965. Through the Traditional Native American Farming Program (TNAFA), Clayton and Margaret brought a Hopi lady to the village to teach people again how to make piki bread. She taught them how to grind the corn, and then mix the meal with ash to make the dough bluer as well as making it more nutritional by making the magnesium, zinc, calcium and iron more bioavailable. She also helped them to acquire the proper stones to make the bread, and to season an old piki stone that Margaret found in her mother’s possessions. There are now 12 women in the community who regularly make the bread. In addition, Winona has been working to incorporate blue corn flour into recipes for conventional foods, like pancakes, muffins, fry bread, and batter for onion rings. 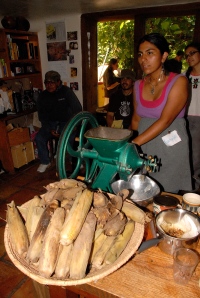 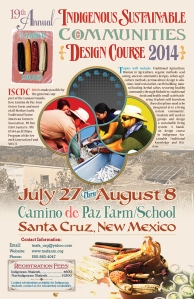 The Design Course is a thirteen-day intensive training in ecological design, natural farming and earth restoration, and teaches permaculture methodologies for improving the soil and growing food. The goal of permaculture is to create or maintain biologically productive systems that that have the diversity, stability, balance and resilience of natural ecosystems. For example, rather than mono-cropping, permaculture encourages companion planting (for example the traditional “three sisters” combination of corn, beans and squash). TNFA is conducting their 19th annual design course this year. Other programs hosted by TNAFA include corn processing for home use, creating seed banks and libraries, home gardening workshops, youth in agriculture courses, and workshops on marketing traditional crops, packaging, value added crops, growing medicinal herbs. Clayton has been pleased at the number of young urban Native people who have take the courses and brought this information back to urban centers to start gardens. 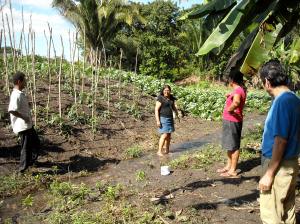 Margaret in Belize conducting a TNAFA workshop with Mayan farmers

TNAFA also has and Indigenous Outreach Program, designed to assist in the exchange of agricultural and cultural knowledge with other indigenous peoples outside of the Southwestern United States. For example Clayton and other members of TNAFA have been working with Mayan people in Belize, conducting workshops with the Xunantunich Women’s Cooperative as well as the Western Women’s Agro Processing Coop, and helping to build a water filter and training/cultural arts center. They are also working with the principal of Buena Vista Government School on a school garden. 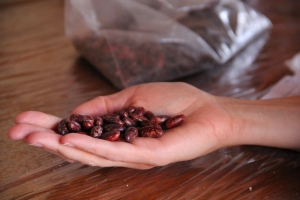 In addition to education, TNAFA has also been engaging in policy work around traditional seed preservation. In 2006 they partnered with the New Mexico Acequia Association to write the 2006 Declaration of Seed Sovereignty, which emphasizes the importance of landraces (seeds adapted to certain regions) and the relationship between indigenous communities and their traditional seeds, and declares opposition to genetically modifying or patenting seeds, and calls on tribal and state governments to create GMO free zones to protect indigenous crops from cross-contamination. The declaration was adopted by Tesuque and Pojaque Pueblos, as well as The Eight Northern Pueblo Indian Council, and The All Indian Pueblo Council. TNAFA is also working with Representative Michelle Lujan Grisham of New Mexico to push the Native Seed Protection Act (HR3782) through the US House of Representatives, and with Senators Heinrich and Udall to pass a similar bill (S2116) in the Senate. The House bill was introduce December 16 2013, after which it was referred to the Committee on Agriculture. The Senate bill was introduced on March 12 2014, after which it Read twice and referred to the Committee on Agriculture, Nutrition and Forestry. The purpose of the bill is “To direct the Secretary of Agriculture, in consultation with Indian tribes, to make grants, competitive grants, and special research grants to, and enter into cooperative agreements and other contracting instruments with, eligible entities to conduct research and education and training programs to protect and preserve Native American seeds, and for other purposes.”

As Clayton stated, “The act of generating food for ourselves and our community also becomes a political act. We are asserting sovereignty, an area of self-sufficiency, by growing food for ourselves and our community.” The Traditional Native American Farmers Association (TNAFA) has been working for over two decades to assist Native communities, in North and South America, in becoming more self sufficient though teaching about Native farming and food production.

And for a great July course, see flier below. 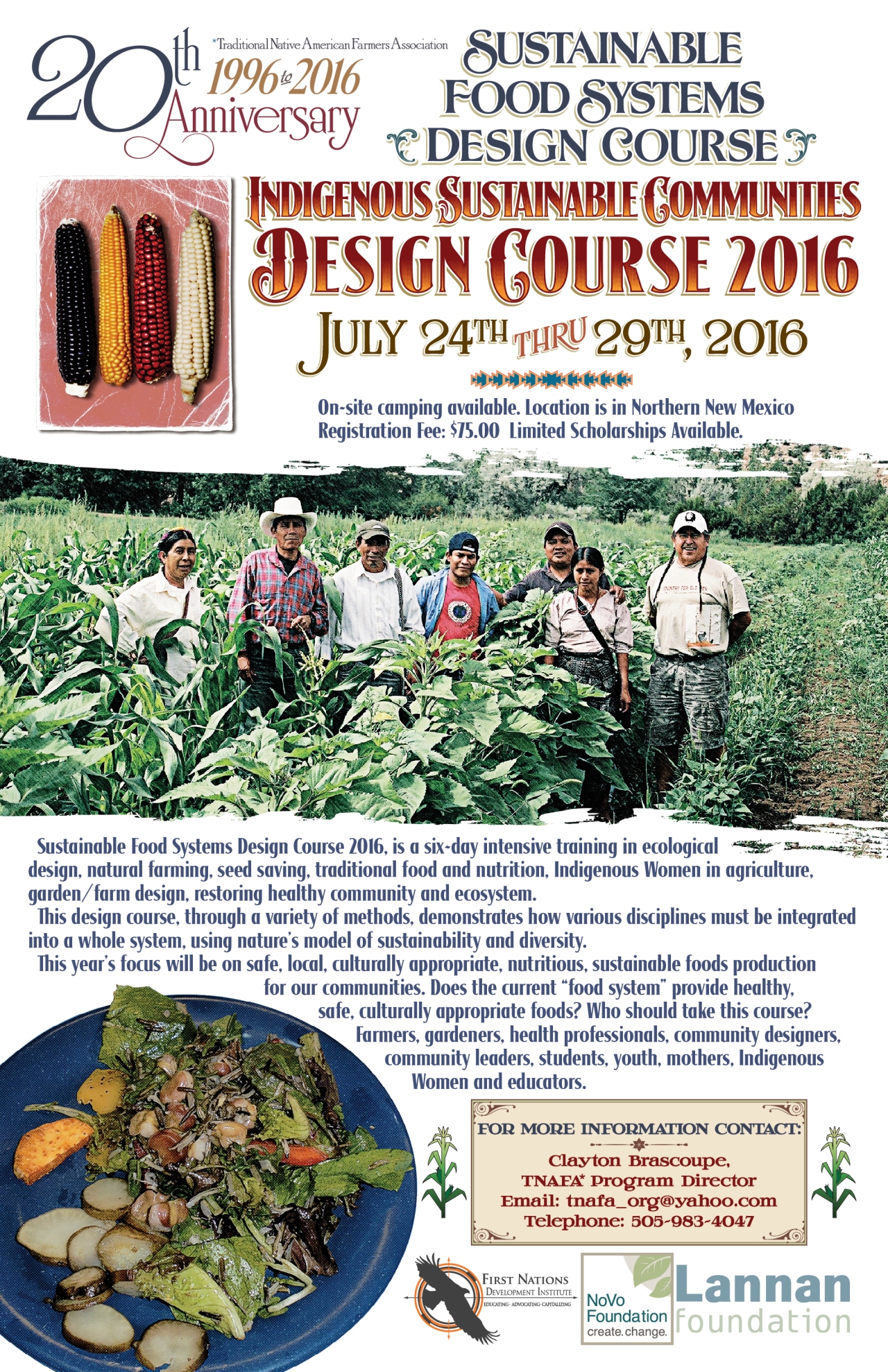 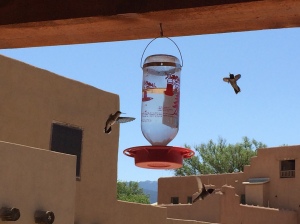 Hummingbirds on Clayton’s back porch. Photo by Elizabeth Hoover 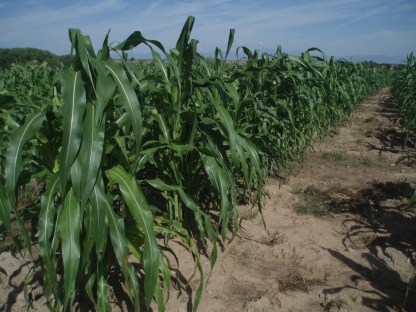 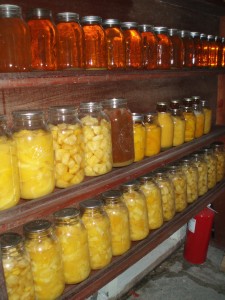 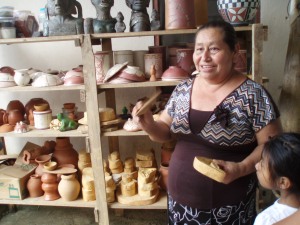 Women’s Co-op in San Antonio,Cayo, Belize. They have a community kitchen and chicken butchering facility, and are working on relearning pottery and other local crafts. Photo by Clayton Brascoupe 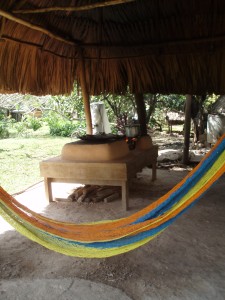 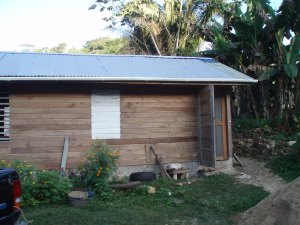